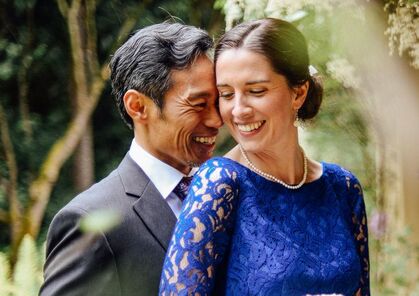 Andrew Flojo & Angela François
​When Andrew started attending dance classes in Olympia in 2002, Argentine tango was never a dance on his radar. It was swing, Lindy hop, and salsa that interested him. That is, until his ballroom instructor friend Karen Idecker said to him, "You should try Argentine tango, I think you’re gonna be good at it!" He went to his first tango lesson with Karen, taught by Sonny and Nancy Newman, and it intrigued him. The music and the dance brought out a freedom of creativity and expression that surprised him. Andrew was then introduced to Eva Lucero and Patricio Touceda of Buenos Aires, who wowed him with their style of dancing and connection. He became one of their ardent students--he was hooked! He studied with them for several years before beginning to teach. Other teachers and dancers that have influenced Andrew are Gustavo Naveira & Giselle Anne, Carlos Barrioneuvo & Mayte Valdez, Julio Balmaceda & Corina de la Rosa, Alicia Pons, Federico Naveira & Ines Muzzopappa, Ariadna Naveira & Fernando Sanchez, and finally the late Gavito.

Andrew has also been a full-time licensed massage therapist for over twenty years. He brings his knowledge of body mechanics, posture, and injury prevention/rehabilitation into his teaching. In 2007 he decided to share his passion for tango, and began teaching in Olympia, WA. Andrew is excited to teach a dance that he is passionate about with his partner Angela, and is grateful to be building a wonderful community of tango dancers in Olympia.

Angela was inspired to begin her tango journey in 2006 after watching the Sally Potter film The Tango Lesson--the passion and longing felt through the music deeply moved her. Intrigued by the intensity and beauty of the dance, she soon after sought out her first tango lessons with David and Elizabeth Walsh at the Evergreen State College and quickly fell in love with tango. Andrew was also one of her first teachers here in Olympia in 2007. His enthusiasm for the dance and love of tango music inspired her, and after taking lessons for several months, she became his teaching assistant. They have been dancing together ever since!

​Influential instructors include the lovely Carlos Barrionuevo & Mayte Valdes, Jennifer Olson, and recently Maureen & Carlos Urrego. Angela enjoys the playfulness, creativity, and intimate connection experienced through tango and is happy to be teaching classes and hosting milongas in Olympia with her amazing husband. She loves sharing her knowledge of this unique dance with students and strives to make tango accessible and fun for everyone that takes her classes. Angela loves to dance and also enjoys Dominican bachata, salsa, blues, swing, and ecstatic dance.

“We ought to dance with rapture that we should be alive and in the flesh, and part of the living, incarnate cosmos.”
— D. H. Lawrence